Internal peace is an essential first step to achieving peace in the world. How do you cultivate it? It’s very simple. In the first place by realizing clearly that all mankind is one, that human beings in every country are members of one and the same family. — Dalai Lama 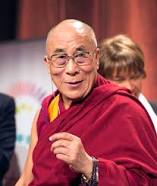 If Hurricane Harvey taught America and the world anything it is that when tragedy strikes “all mankind is one and the same.”

His holiness reminds us that when talk of war and hatred surround us, an essential step toward peace is to seek peace first inside of us. Whatever or whoever we are at war with, we first must come to a truce and then work toward a lasting peace.

Is there something or somebody you are at odds, something or someone who prevents you from finding peace? The Dalai Lama says remember that that person or thing is part of your family. It is much like twin brothers who seem to fight both physically and verbally all the time until someone from the outside tries to got to war with one of the siblings. Then the two brothers come together immediately in defense of the other. How often you heard, “But he or she is family. I still love him/her.”

It is simple, for there to be world peace, we must seek peace inside of ourselves, and the first step is realize that we are all one, part of the same family.

Yes, it is easier said than done, but it’s a start!