Did you ever play blind man’s bluff as a kid? Blind man’s buff is played in a spacious area, such as outdoors or in a large room, in which one player, designated as “It”, is blindfolded and gropes around attempting to touch the other players without being able to see them, while the other players scatter and try to avoid the person who is “it”, hiding in plain sight and sometimes teasing them to influence them to change direction. 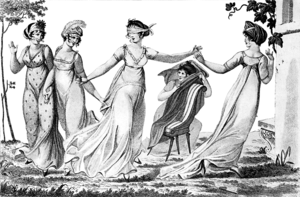 As a child I even played the game in a swimming pool. Now that was a challenge.

I thinks sometimes our lives are like the game. Hopefully we live life with some vision of the life-path we want to travel, but if you are like me detours appear whenever I am confident I going down the right road or have the end in sight. I end up in unintended places doing unintended things. When I talk to groups, churches, and organizations I am often asked what is the title of my talk. Lot’s of times I say, “My journey without maps.”

God, offers us certain guideposts when we stray too far. Through his words and that thing he placed in our heart called a soul we feel a tremor when we stray too far. My problem is I sometime ignore the tremor, but thank goodness, God is there like a guide to get us going in the right direction once again. The guide may take many forms, but be assured he/she will be there.

Give some thought this weekend to a few moments when you were lost and out of the blue someone/something guided you to find your way. I am now over seventy, but I’m still feeling my way, much like the game of blindman’s bluff.