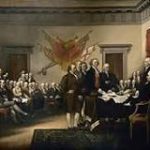 Tomorrow, I will get back to my favorites subjects for meditation and prayer, but please indulge me one more day.

I couldn’t help but think last night as Suzy and I watched the Fourth of July Celebration with the Boston Pops about the founding fathers and how we look on them with reverence today because we honor what they did, rather than focusing on their flaws and idiosyncrasies. We see them as the glass half full rather than the glass half empty. 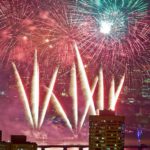 My suspicion if any one of them were to enter our political arena today they would be laughed off the political stage. Imagine a President with hippopotamus teeth, a President so small in statue he was called a “withered little apple john” or another who refused to shake hands. Franklin would be too old, and Jefferson — oh my gosh he was bankrupt half the time and fathered more than one illegitimate children with Sally Hemmings. Can you imagine what Fox News would say about any one of our founding fathers.

There is a lesson here for all of us. In each of neighbors we are to seek out the brave, the courageous, and the genius in every single one, and cast aside the flaws because we all possess them. I’m as guilty as the next, and maybe when we talk about dedicating ourselves to certain principles, at the top of the list should seek the good and ignore the bad.

PS: Yesterday, I had a peach ice cream cone in honor of all my readers. Thank You!