Maria Popova’s post this Sunday talks about often asked questions posed to Steven Hawking during his lifetime, which Hawking attempts to answer in his final book, Brief Answers to the Big Questions. The book begins with the question is there a God? 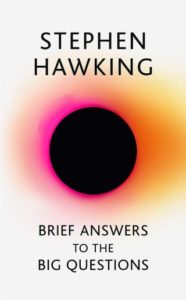 Hawking concludes with his answer to the universal question: “It’s my view that the simplest explanation is that there is no God. No one created the universe and no one directs our fate.”

I have great respect for Hawking, but with his conclusion I whole-heartily disagree.

I once told my EFM class that I could prove the existence of God by the simple use of the mathematical mystery the number Pi. They were all believers, but didn’t buy into my method of proof. I intend on buying Hawking’s book because I believe in understanding different points of view, but I don’t think I will change my mind.

Popova begins her post about Hawking with a different quote. It is one that I think better states my belief: “Every formula which expresses a law of nature is a hymn of praise to God.” — Maria Mitchell.

What is your answer?